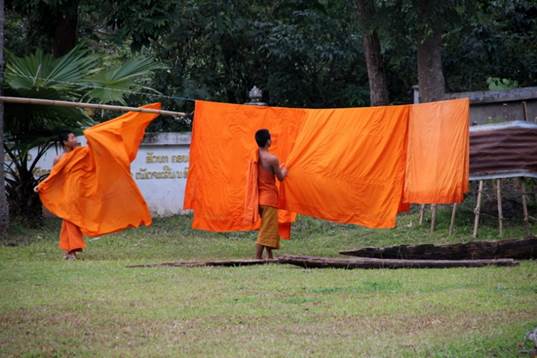 Hello! My name is Simon and this is a blog about my adventures and travels. Now I will tell you about my trip to Lao. I went there in February 2015. And this is Luang Prabang – the backpacker capital…

When we were in Luang Prabang there were monks walking along the street and people were giving some rice, chips, jellies and cookies to the monks.

There was a night market, too, with machetes, voodoo dolls, bags, and tasty crepes with banana and chocolate. Bamboo bridges are big, made of bamboo, but during the rainy season there aren’t any bamboo bridges, because the Mekong River washes them away. `

Next trip was up the Nam River. We went there with a small boat. At the end there was a little village with some guesthouses, restaurants and, first of all, very nice people. I liked this village.

Then, we went to the big cave. In the cave and in the village, too, there were many bombs. During the Vietnam War the Americans dropped 270 million bombs on Lao.

We surfed the Net and we read about the beautiful Wat Phou festival in Champasak. When we flew there, we went to the hotel and we talked to the guy at the front-desk. We flew here, because we read about Wat Phou festival. What is the plan for the festival tomorrow? And the guy said – the festival finished yesterday. So we changed our plans. We planned to rent motorbikes two days later. So we said: Let’s do it tomorrow! Let’s rent bikes tomorrow and we will ride on motorbikes two days more.

On the second day on motorbikes, when we were riding on a small island, we saw a little road and a sign “forest temple”. We turned there and there were so many bumps. On the second big bump we fell with a motorbike. My foot hurt very much and I couldn’t stand up or walk. I needed help of my Mum or Dad.

Next, we were riding on motorbikes for four days on the Bolaven Plateau. We were riding to the waterfalls. These waterfalls were maybe 400 ft tall. They were not so big and not so spectacular, but I liked them anyway.

Then, we went to Mr. Wieng. Mr. Wieng is a nice guy who has a first guesthouse there with a beautiful coffee plantation – about 50 hectares of coffee trees. Mr. Wieng was super and talked with us a lot. We liked him very much!!!

When we finished our visit at Mr. Wieng’s guesthouse, we flew to Cambodia and took a boat to Koh Totang. It was a beautiful little island – 1 km by 500 meters. Snorkeling there was great! One bad thing was, that there were many sea urchins. One of them stung my dad. A mini coral reef on another side of the island was the best. There were very big corals and beautiful little fishes in many different colors.

Now, I will tell you about the most scary adventure during this trip. One afternoon my dad saw something. He didn’t know what it was and he said – Oh, no, is it really a scorpion!? My dad went to the girl at the front-desk and said – Excuse me, but we’ve got a little problem sitting on our roof, it is a scorpion. She gave an insect spray to my dad and said – Take this and kill it! But my dad was scared. Then she asked – Do you want my friend to do it? The guy came to our bungalow and killed the scorpion with a newspaper and his hand. That was funny and scary! 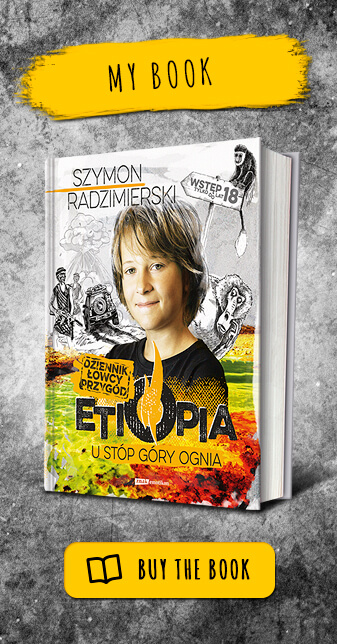 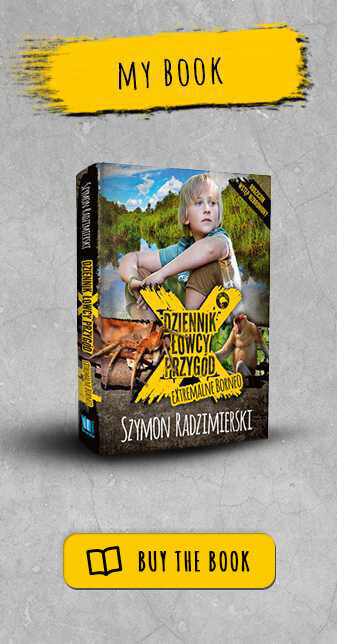 Hello! My name is Simon, I am 10 years old, I live in Poland and I write this blog about my adventures and travels. I love extreme and hardcore places, such as jungle trekking, motorbiking or sleeping on a volcano. I love wild animals and my pets too :) If you like my blog leave a comment or click Follow to read my new posts. Thanks :)

© 2023 Simon's Travel Blog PlanetKiwi
Cookies help us deliver our services. By using our services, you agree to our use of cookies. More Info | OK